Quinta Couselo is located in the subzone of O Rosal, on the southern limit of the DO Rías Baixas, at the mouth of the Miño river and east of the Atlantic ocean. The region benefits greatly from a unique micro-climate, influenced by the Atlantic ocean, with mild temperatures, abundant rainfall and the hours of sunlight necessary for the correct ripening of the grapes.

The vineyards have sedimentary soils that are rich in organic matter, acidic and deep. The winery grows Albariño, Caiño Blanco and Loureiro grapes. The vineyards are cultivated using methods compatible with the preservation and improvement of the environment (integrated production). Two different vineyard management systems are used: trellises and the Galician Pergola.

The “A Cheira” or “da quinta” property, where the winery is located, has a 4.9 acre vineyard (mainly Albariño vines over 30 years old, together with Loureiro and Caiño Blanco, which are trained using the Pergola system). It is enclosed within the original walls built by Cistercian monks.

The two, ancient pines, which inspired the winery logo, are situated in the centre of the Quinta estate and have survived O Rosal's history for the last 250 years. The Carballas (or Tamuxe) river, last of the Miño´s tributaries, borders the southwest end of the property.

The "Sobral" or "mountain" vineyard is a plot located in an exceptional site 164 feet above sea level. It faces southwest, allowing for greater sun exposure, giving optimum ripening conditions for the grapes. It covers an area of 229,659 square feet with approximately 7.4 acres of Albariño vines over 15 years old. The same two training systems are also used here: Trellis and Pergola. Its slate soil is quite rare in the area.

In addition to owning its own vineyards, for over 20 years the winery has also been buying grapes from other winegrowers in the O Rosal area. Their systems of cultivation are controlled by experts from Quinta Couselo. The winery is very aware of the influence that the growing process of the vine has on the quality of wine, which is why  we do not allow the use of systematic fungicides or herbicides in the vineyards.

All of the wines are made with our own estate grapes or those bought from other growers with whom we have a long-term relationship. The winery carries out rigorous and continuous controls. Harvesting is done by hand, transporting the grapes to a refrigerated container with a constant temperature of 46-50ºF. After selecting clusters by hand on a vibrating table, the grapes are destemmed and then left in contact with their skins at low temperature before undergoing pneumatic pressing to obtain a high quality must. This then passes by gravity into stainless steel vats for temperature controlled fermentation. Fermentation is completed at a controlled temperature of 61º F. 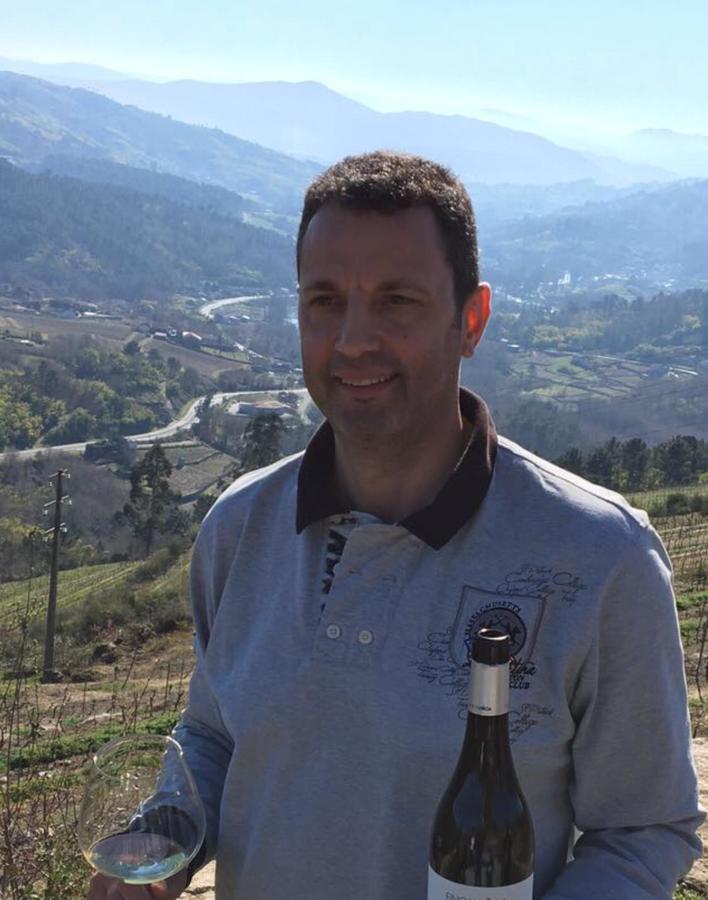 José Manuel Martínez Juste was born on 22nd February 1968 in Ribadavia, the capital of the province of Ribeiro, a region of Spain with a great winemaking tradition.

In 1994 he took over the technical management of an experimental winery in D.O. Ribeiro, which he ran up until 1998.

In 1998, together with Alvaro Bueno, he founded the viticultural technical consultancy, Catavinos, in Ribadavia.

In 2002, he was elected as president of the Galician Winemakers Association and its spokesman in the national federation; duties he performed up until 2014, when he handed over responsibility to the vice-president of his management team.

Over the 20 years of his winemaking career, his wines have achieved recognition with a great number of national and international awards. He likes to describe his wines as being “sincere”, a true reflection of the soil, climate and grape varieties, and even, he would say, the soul of their maker. They are wines that transmit sensation, evoke memories, and take us to an imaginary landscape.